Hook is a personal favourite of mine. It did not fare well with critics and the box office but had become a cult classic when it was released on video. Hook is a fantastic children’s adventure and brilliant take on Peter Pan. It is full of fantastic set pieces with a wonderful Robin Williams as the central character and at its core it is a colourful adventure. Whether you still chant Rufio! or love the imagination food fight, Hook is one of those films that adults didn’t get but children loved. It was grossly underrated when it was released and now in  the internet age it is comforting to see that there is a loyal fanbase for this wonderful and magical film.

Dun-dun-dun-da-dunnn, the five note sequence that is synonymous to this film. This is one of many Spielberg’s flirtations with science fiction. Close Encounters of the Third Kind is about humans trying to get in contact with aliens. The visual effects are brilliant and colourful, the John Williams soundtrack is grand in scale but wonderfully intricate. Hugely successful with critics and the box office, this was Spielberg’s grand introduction into sci-fi just after making Jaws and what a fantastic, joyful introduction it was. A film my mum mentions she watched in the cinema about 10 times and is the main reason as a child I was making mountains out of my mash potatoes.

This is the true talent of Spielberg, he can switch from making grand adventures for the family to bleak historical films such as Saving Private Ryan. The D-day landing scene alone could easily warrant this film a place on this list. It is definitely up there with one of the greatest scenes ever filmed. The lack of break in action and the claustrophobic camera work of the D-day landing created a sense of anxiety and nausea. That scene alone perfectly translates the horrors of war. A harrowing look into World War 2 that got Spielberg his 2nd Academy Award, this film was truly a masterpiece and an absolute travesty that this film lost to Shakespeare in Love for Best Picture.

The first ever Summer blockbuster, one of the key films to kickstart New Hollywood. Jaws was a game changer in film and gave Spielberg that platform that he still stands on today. The simple plot of a shark trying to eat people captivated audiences with the simple notion of less is more. Hardly seeing the shark ramped up the tension of this film but it is not just the shark that makes this film so brilliant. The three main characters, Roy Scheider, Robert Shaw and Richard Dreyfuss have brilliant chemistry. Quint’s speech about his time being surrounded by sharks while on the USS Indianapolis is one of the most captivating scenes from Spielberg. Without Jaws there is no Spielberg and without Jaws, Hollywood could of been a different beast then it is today. Full of tension and action, Jaws is one of those films that it’s influence and legacy will last longer than you or I.

1993 maybe Spielberg’s greatest year ever. In the same year Schindler’s List and Jurassic Park was released. Schindler’s List is one of the most horrifying cinematic representations of the Holocaust. This film showcases Spielberg’s versatility as you can’t get any further from a film then Jurassic Park and Schindler’s List. The entirety of the film is in black and white and is over three hours long but the film keeps you gripped to your seat and is a very emotional film with some memorable and heartbreaking scenes. Spielberg being Jewish identifies why this film is so intricate, the girl in the red dress is a very striking image. Spielberg is better known for his family blockbusters but Schindler List will be known as one of his greatest masterpieces.

If someone asked me to what the most ‘Spielbergian’ film is, it would be  E.T: Extra Terrestrial. Spielberg’s films are usually full of adventure, magic, sci-fi, full of wonderful set-pieces but full of heart at its core. E.T is a perfect example of all of these themes. E.T  is a story of an alien crash landing on Earth and must find his way back home with the help of a 10 year old boy named Elliot. I have never liked the design of E.T, it looked weird and creepy but it has become so iconic in pop culture. This is truly a magnificent adventure from start to finish and full of heart. The dynamic between E.T and Elliot is brilliant and heartwarming. E.T has become a sort of compulsory childhood viewing for multiple generations and will continue to be. E.T: Extra Terrestrial  is a perfect example of the common Spielberg tropes with hints of magic, adventure and heart. 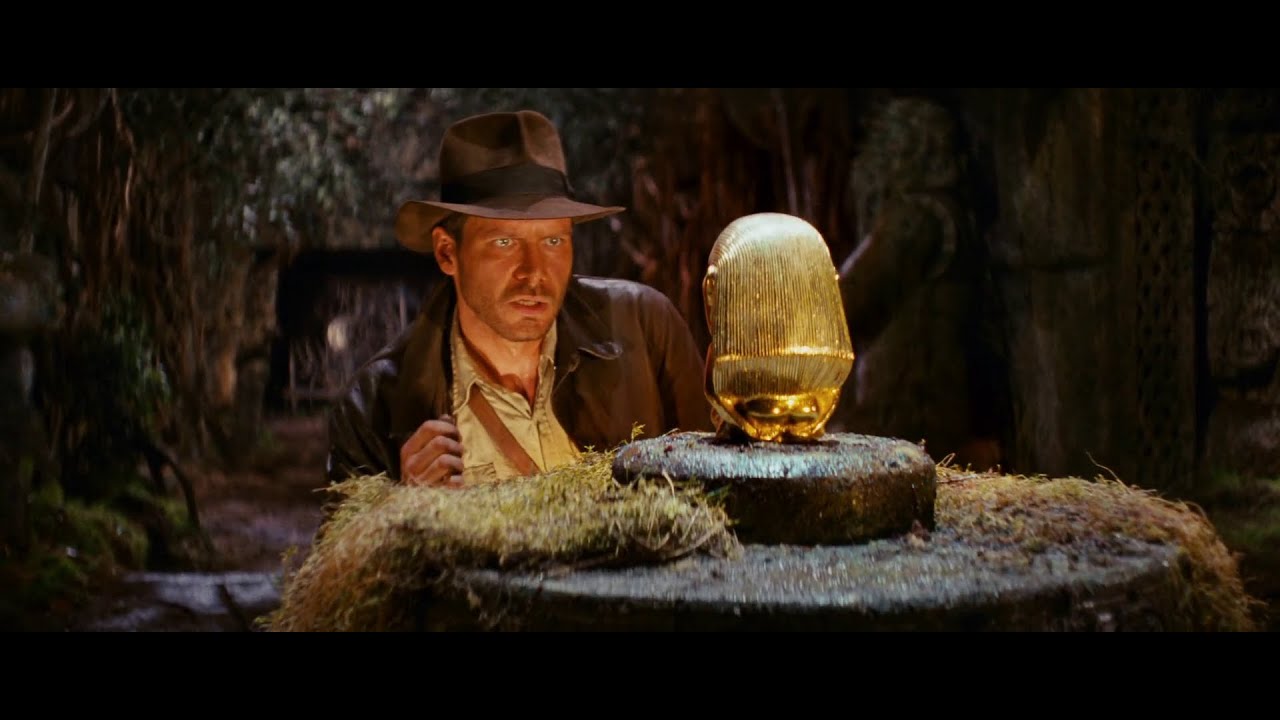 Talking about adventure, Indiana Jones is one of the most iconic characters in film. His first outing trying to find the Ark of the Covenant is another cinematic masterpiece. The pairing of good friends Spielberg and Star Wars creator, George Lucas, created the captivating and lovable Indiana Jones which was influenced by old school cinematic matinees. Raiders of the Lost Ark is a fast, brillant adventure to watch with the family. It has horrifying scenes of melting Nazi’s but it is still perfect for the family. The true meaning of cinema is to escape and Raiders of the Lost Ark does that, it is a fun adventure that places a down to earth character in a world of craziness.  The dream to travel and explore ancient myths is fulfilled and lived out by Indiana Jones, one of the most iconic characters of all time with some of the most iconic scenes of all time. Raiders of the Lost Ark is fun, magical and a joyful, eclectic adventure.

There is a lot of debate of what the best Indiana Jones film is and if someone said Raiders of the Lost Ark I probably couldn’t argue with them. It is a near perfect film, however, The Last Crusade has everything Raiders has, but more. The chemistry between Harrison Ford and his on screen dad, Sean Connery is perfect. There back and forth is so funny it  holds this film together brilliantly. It is another magical adventure that gives Jones the task to find the Holy Grail. Another fun filled family adventure with one of the most iconic characters in cinema that is not just one of the greatest Indiana Jones or Spielberg films of all time but could be argued to be one of  the greatest films of all time. Spielberg will never make a better film than Jurassic Park. This is not an insult, in fact a huge compliment. Jurassic Park is a near perfect film that encapsulates the director’s common style and themes. Jurassic Park is about a scientist that finds a way to bring back dinosaurs and plans to open a park full of them. Things go wrong when someone tries to steal the dinosaurs DNA and accidentally shuts down all the security features of the park, letting loose the dinosaurs. The magnificent John Williams score is so grand and beautiful, it is perfectly entwined with the large visual scale of the film. The brilliant visual effects that still hold up today and impressive practical effects of the T-Rex is just some of the reasons why Jurassic Park is Spielberg’s greatest film. It is full of memorable characters such as Alan Grant, John Hammond, Ellie Sattler and the shirtless Ian Malcolm. Every part of this film works perfectly together, it is full of adventure, action, comedy and a drop of that Spielberg magic.  Jurassic Park when it was released became the highest grossing film of all time and in my opinion no summer blockbuster has matched it’s quality. The music, the visuals, the characters, the grandness of the film. this is Spielberg’s magnum opus.