The popular Adult Swim show, Rick and Morty, has just signed a new deal with the network for 70 new episodes to be commissioned. A unprecedented amount to be given if you take in the fact that at this current time of writing there are only 31 episodes of the actual show. This is great news as Rick and Morty is one of the greatest shows that is currently on air. It has fared well with audiences and critics alike. The show about an alcoholic, depressive scientist takes his grandson across dimensions for random adventures with a perfect blend of chaos, comedy and emotional depth. This list was hard to whittle down to 7 and it will anger some but below is my pick for the top 7 episodes of Rick and Morty so far. 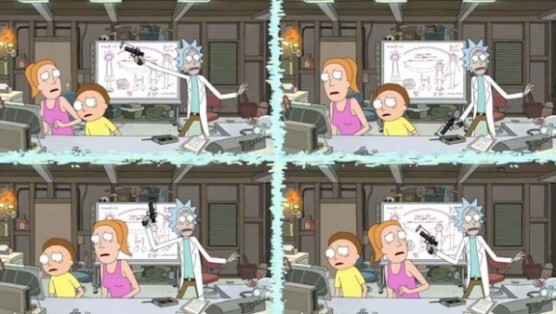 A Rickle in Time is a good example of the show’s creativity and use of multiple dimensions. The episode starts with time being frozen after the previous episode of Morty and Summer throwing a party and had to clean it up before their parents got home. An argument while time was restarted leads to a creation of two timelines of which snowballs into further timelines being created. Rick, Morty and Summer must work together to fuse the timelines. This episode is definitely one you have to rewatch just because of the multiple timelines split screened throughout. The complexity of this episode is fun to watch and is enjoyable to cast your eyes over the multiple timelines happening simultaneously. It is fast paced, chaotic and hilarious to watch. Also there is a measure of good character development in this episode. The side story of the episode follow the parents Beth and Jerry, who hit a deer and Beth, who is an vet, attempts to save the animal but is challenged by a hunter, who claims it is his deer. Jerry gets hold of the Elk and Moose institute to help Beth claim the deer and save it. Funny, fast paced, complex and a underlying depth of emotion. A Rickle in Time is a good encapsulation of why Rick and Morty is such a good show.

Anatomy Park is one of my favourites just because it is a simple concept that has been done before, i.e Magic School Bus, but it is given the old Rick and Morty treatment. Rick decides to send Morty inside a homeless man by shrinking him down, so he can save him. While inside, there is an enclosure called Anatomy Park, the enclosure holds diseases and, ala like Jurassic Park, the diseases break free and run riot inside the homeless man’s body. This is one of my favourite episodes mainly because of John Oliver’s cameo as Dr Xenon Bloom, an amoeba who co-founded Anatomy Park. It has one of my favourite moments in the show when they encounter Gonorrhea, Bloom whispers, ‘Gonorrhea can’t see us if we don’t move’, it starts to attack and then Bloom quickly corrects himself, ‘oh I got it wrong I was thinking of a T-Rex’. That small moment made me laugh more than it should of. This episode has a lot of laugh out loud moments including the naked homeless man being enlarged to the size that eclipses America and the scene where a news reporter goes to the town where his genitalia hovers over is hiarious. That sentence alone is a good enough reason why this is one of the best episodes of the show.

The season two finale is a perfect example of how to do a season finale. The wedding between Rick’s best friend, Bird Person and Beth’s friend, Tammy is a shocking and action filled episode that left fans craving for more.  Tammy shockingly turns out to be a Galactic Federation agent and kills Bird person and captured all the criminals that attended the wedding. Rick escapes with his family and attempts to live on another planet. This episode is short on it’s laughs but it is well justified by the weight of the episode. The final moment of Rick sacrificing himself to save his family, is so unlike Rick, that the moment is shocking and emotional. This episode throws the spanner in the works so much that when it resolves you are left with your jaw on the floor and wanting more episodes soon. From this you can kind of understand the fans being angry from waiting so long for season 3.

And leading on from that fantastic finale, this is a perfect example of an opening episode. Released on April Fools Day, which is fantastic in itself, this confirmed that season 3 would be released and the quality of the season will be just as good as the previous. This episode tracks Rick’s escape from prison from the Galactic Federation. It is full of laughs and features the councils of Rick’s, which is always welcomed with open arms. This also started the epidemic craze of having the need for McDonald’s Szechuan sauce. This is a great action packed resolution to the season two episode that brings about a new equilibrium for the third season. Beth announces she will divorce Jerry and Rick becomes the new patriarch of the family. The Rickshank Redemption is a perfect way to set-up a new season and proves that Rick and Morty is the only show that could create a riot for a sauce from a fast food restaurant that was released over 20 years ago. 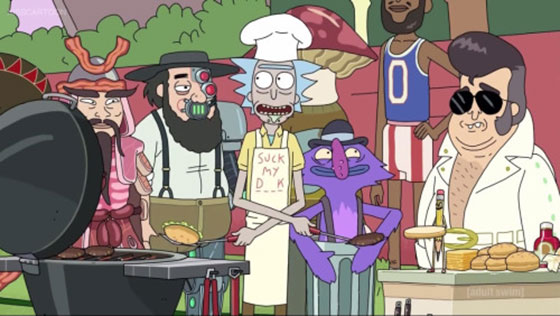 Rick and Morty is at it’s best when the writer can be let loose and go completely random. The show at times seems improvised and Total Rickall is one of those moments where it excels in its lunacy. Total Rickall is about a parasite that is inside the house which survives and multiplies by implanting false memories into people’s head. Rick shutdowns the house and attempts to figure out who is fake and who is real. This episode is fun throughout, the writers are let loose to create any character they want. This leads to characters such as Duck with Muscles, Pencilvester, Amish Cyborg, Hamurai and Mr PoopyButthole. The level of creativity and ludicrosity of the episode is manic and it goes from having 6 people that snowball  into hundreds of characters. This is just madness but fun madness. Rick and Morty is a show that is full of chaos and Total Rickall is perfect example of this. Also the twist at the end of the episode with Mr PoopyButthole is fantastic and harrowing.

Okay so I must confess that my favourite episodes of Rick And Morty is the nonsensical episodes. The episode is about Rick watching TV and getting bored. He decides to play around with the TV box so he can watch any channel from any universe and any dimension. This leads to a sketch type format where Rick and Morty just watch random shows. This gives the writers the opportunity to go crazy and create anything. Some of the shows they watch are just hilarious concepts. This episode has hilarious scenes such as, Ants in my Eyes Johnson, Baby Legs and Regular Legs. Real Fake Doors Salesman and my favourite the trailer for the two brothers film but as the trailer goes on the title evolves into, (ahem!) ‘Alien Invasion Tomato Monster Mexican Armada Brothers Who Are Just Regular Brothers Running In A Van From An Asteroid And All Sorts Of Things The Movie’. This is a crazy episode that is refreshing to watch and it has become so popular that the format was copied for season 2, Interdimensional Cable 2: Tempting Fate, and season 3, Morty’s Mind-Blowers, This is a good example of the type of comedy that Rick and Morty has, and only people with a high IQ can understand the comedy of Rick and Morty. Tales From the Citadel (The Atlantis Mixup) is not just the best episode of Rick And Morty but one of the best episodes ever written for TV. While Rick and Morty go on an adventure to Atlantis, the episode decides to divert from our usual heroes and is based around the citadel. The Citadel is a city of Rick and Morty’s that is rebuilding itself after the ‘real’ Rick destroyed it. The story is centred around President Morty campaign to become president, however the episode is 6 different stories that mould together for one outstanding and dark ending. This may seem like a typical weird concept from the show but every story works as a social critique. You have the cop story that critiques police brutality and poor neighbourhood patrolling themselves. The Factory Worker Rick is a critique on capitalism and modern slave labour. Then we have the coming of age Morty’s, which is a Stand By Me parody, which is fantastic. Also the President Morty storyline becomes a critique of elections being a media circus and gaining power through fear. There is just so much layers and story in a 30 minute episode that it is easily one of the best episodes of any television show I have ever seen. It is a well written, well structured episode that still has laughs and still is crazy. Rick and Morty can be argued to be one of the greatest shows on TV at the moment. People maybe put off by the gross out humour and random nature of the show but this episode is a great reminder that it is a well thought out and well written show. This should of been the finale because this would be a great way to end it and would create so much hype for the fourth season. The ending with the returning Evil Morty brings some hope for him returning in the next season. If you are not excited for the ordered 70 new episodes, watch this episode, I guarantee you, this will solve your issue.