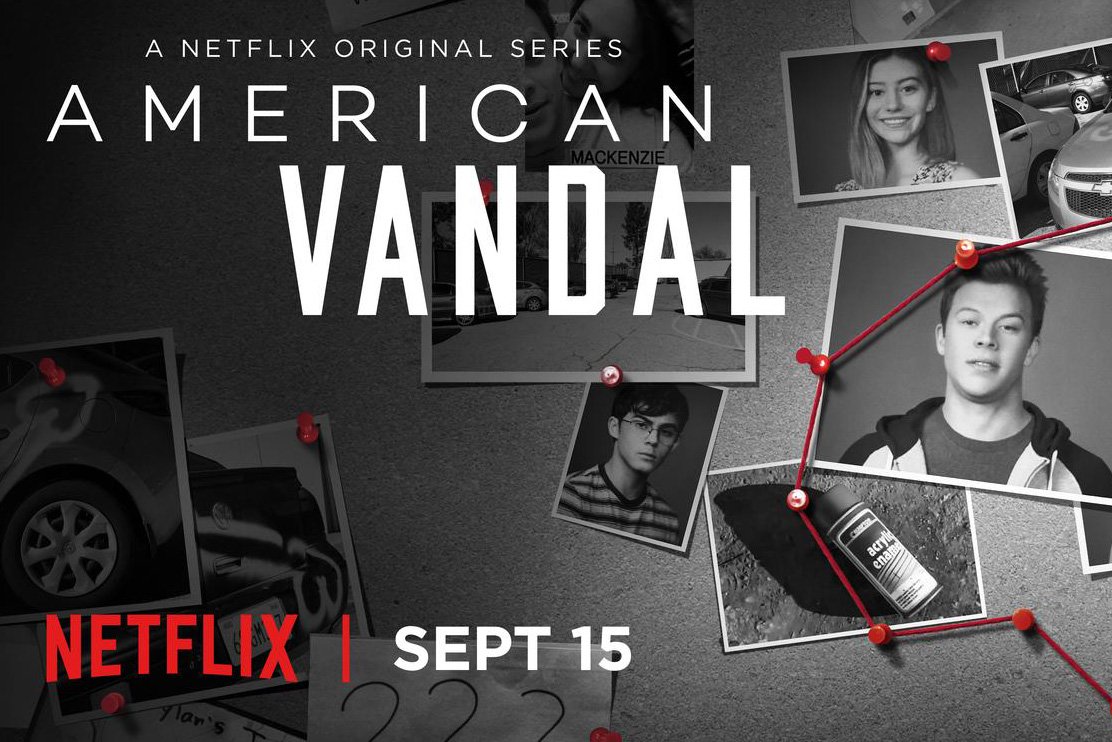 I was one of those fans that got on the Making a Murderer train and binged the show in a couple of days when the series come out on Netflix. When I heard there was a show coming out on Netflix parodying that but in place it was about a vandal at a American high school that spray painted 27 penises on 27 cars, I had to see what it was about. It seemed to be absolute ludicrous idea for a show and it was, but it was more then that.

American Vandal is about an incident involving a high school which was vandalised through the method of spray painting 27 penises on 27 teachers cars. Dylan Maxwell is the supposed culprit as he has a history of drawing dicks through his school life. There is no concrete evidence against him but he is the most likely candidate. Peter Maldonado, another high school student, starts to film a documentary trying to find the truth behind who vandalised the cars. In the style of Making a Murder, American Vandal brings the style of a polished TV series about drawing 27 dicks.

Now let just address the elephant in the room and just say this is not just about dicks being spray painted on cars. It is central to the plot and is a joke that can run thin after 8 episodes. It is funny and the outrageous nature of a whole series being based on this one event is hilarious. However the professional nature and the amount of money and effort put into this show is a reason why Netflix is so good. This would of never aired on traditional television. This would of been a quick 3 minute video on YouTube or Funny of Die. Believe me it would of been fantastic but to give this single idea an 8 episode series, watching it in it’s entirety, it is fair to say this show is more then a dick joke.

Once you get past the joke, you become succumbed by the mystery and ludicrous theories start to seem plausible. They spend a whole episode whether a hand-job happened or not. I’m not making this up but by that point I was totally engrossed in the mystery. This whole hand-job was a crucial part of the mystery.  For some weird reason I was more hooked for this show then I was for Making a Murderer. Throughout the series everyone became a suspect and it was all finely connected. Every teacher, every student, every person was given a motive and possible cause. Events that happen unraveled different vantage points that worked in some sort of ‘Pulp Fiction-esque’ story twisting narrative.  Every person was held under a microscope and it was just brilliant of hearing where everyone was and how it was all connected.

All the students and teachers do fit stereotypes of every single high school drama ever created but I think that is the point. This whole show is founded on the basis that everyone is not what they seem. Dylan was picked as the student who did this by everyone, all because of his history and reputation in the school. He is at fault for his past discrepancies but the unfair treatment of being labelled a guilty man is key to the series. He is constantly derided as being stupid and a horrible person and we get a lot of evidence of that but there is some hesitancy for Dylan to try and break out of this character and reputation. The show becomes a focus on image and reputation, something that is an issue in high school. Again you can see similarities to other Netflix produced shows such as 13 Reasons Why. 13 Reasons Why heavily focused on the issued of image and reputation that people get in high school. American Vandal didn’t have the emotional clout of 13 Reasons Why but you can see some similarities with a mystery that was built of high school image.

Some of the characters are funny and you may know some people like the people within the show. Alex Trimboli was a high school snitch, Sarah Pearson was the blonde beauty and other characters fit other archetypes. The humour was consistent, I was never on my floor laughing but the ludicrous nature of the mockumentary kept a smile on my face. I was heavily engrossed in who vandalised the cars. I watched all the episodes in a day. By the finale every theory had been stretched and analysed with hilarious and serious effect. This show surprised me, it was just very entertaining.

This show is not just a dick joke, this just seems to be a method of marketing to get people hooked. It is actually a very good mystery that allows the viewers to try and guess who did it. I was hooked, I didn’t stop until I found out the answers. The balance between the outrageous and the serious is a constant source of comedy but also drama. I have never felt so engrossed and captivated by the theory that it couldn’t be Dylan because he draws ball hairs and the dicks didn’t have them. This is by far one of the weirdest reviews and shows I have ever watched. I can’t believe it got funded but I am so glad it did because this is not just a show of juvenile humour. It is a show that has an enthralling mystery, full of drama and comedy. American Vandal surprised me and I think that if you watch it, you’ll be surprised of how good it really is too.